March For Science: A walk for the defense of Science ! 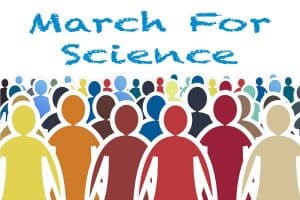 Scientists and people who care for Science are invited to participate to the March For Science on April 22, 2017, a gathering in support of Science that is planned in more than 100 cities worldwide. The goal is to celebrate Science and the role it plays in our everyday lives.

The origin of the March For Science

It all started by a conversation on social news website Reddit in January 2017, just after the success of 2017 Women’s March, and turned out to gather a huge crowd on social media, propelled by recent federal policy proposals to cut funding for scientific research, as well as changes on environmental protection policies by Trump’s administration.

Scientific community appears to be more and more concerned regarding Trump administration policies towards Science. Some criticisms arose regarding the political orientation of the march, and March For Science team recently released a statement on that matter:

While this march is explicitly non-partisan, it is political. We do not endorse any candidates or political parties, but we do advocate for all policy makers to enact evidence-based policies in the public interest. Politics and science are intertwined, whether we face a travel ban that restricts the free flow of scientific ideas, changes in education policy that diminish students’ exposure to science, or budget cuts that restrict the availability of science for making policy decisions.

March For Science in Numbers

There are more than 170 organizations representing different scientific disciplines that are partnering the event.

Additionally, March For Science named 3 ambassadors to lead the movement and speak at the event in Washington, D.C.

Everybody is FREE to attend any of the marches (no tickets required).

You are also encouraged to register online to help organizers track the number of marchers.

If you would like to participate but you are unable to attend a march in person, you can sign up for a virtual march by selecting “I will be joining the march digitally via live-stream”. Indeed, the march in Washington, D.C. will be live streamed on the event’s website.

Find if your city participates to the March For Science and connect with local organizers and marchers from your city:

If your city does not appear in the list, fill a registration form to organize a march:

Organize a march in my city !

This March For Science may be the biggest march in history in support of Science !

Will you be part of history ?

Maybe that’s one small step for you, one giant leap for Science !